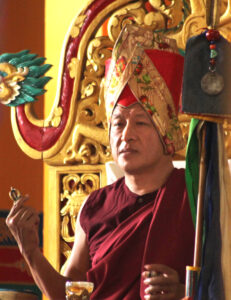 From October 1, to November 18, 2022, Dzongsar Jamyang Khyentse Rinpoche bestowed the transmissions and teachings of the Compendium of Sādhanas (Drubtab Kuntu) at the Dzongsar Khyentse Chokyi Lodro Institute in Himachal Pradesh, India. This compendium contains tantric cycles, instructions, and prayers from all traditions of Tibetan Buddhism and was collected by Jamyang Khyentse Wangpo himself and completed by his student Jamyang Loter Wangpo.

The empowerments, reading transmissions, and teachings took over a month to complete and involved tantric samaya commitment, which has been detailed by Rinpoche here. Dzongsar Khyentse Rinpoche is an incarnation of Jamyang Khyentse Wangpo, so receiving these tantric teachings from him is considered to be particularly auspicious.

During the transmissions, Khyentse Vision Project published a special set of translations that are found in both the Compendium of Sādhanas and Jamyang Khyentse Wangpo’s Collected Works (Kabum).

Full Title:        The Compendium of Sādhanas: A Wish-Granting Well of Precious Attainments

Summary:       A vast collection of meditation liturgies, rites, and instructions belonging to the four classes of tantra from various Tibetan Buddhist lineages.

Like the Treasury of Oral Instructions (Dam Ngag Dzö) or the Treasury of Jewel Mines (Rinchen Ter Dzö),[1] the Compendium of Sādhanas (Drubtab Kuntu)[2] is among the monumental collections of texts assembled by the nonsectarian masters of the nineteenth century. Initially compiled by Jamyang Khyentse Wangpo beginning in the 1840s and eventually completed by his disciple Jamyang Loter Wangpo, the Compendium contains a vast array of Vajrayāna cycles of teachings from the four classes of tantra from numerous lineages. These cycles are of varying lengths, depending on the number of texts included. The tantric cycles contained within this collection comprise a range of material, including:

The name Jamyang Khyentse Wangpo is often mentioned in one breath with the name Jamgön Kongtrul (1813–1899) and the Rimé project that originated in Kham, Eastern Tibet. The Rimé ideal of unbiased appreciation of the teachings of all lineages was neither new nor was it unique to the lamas of Kham. Many Tibetan masters of the past, such as Longchenpa (1308–1363) or Tsonkhapa (1357–1419), studied with teachers of different traditions and held these lineages in high esteem. However, by the nineteenth century many authentic lineages were on the brink of extinction due to various circumstances, including institutional and political ones.[3]

Jamyang Khyentse Wangpo grew up in Derge, a relatively independent kingdom in Eastern Tibet, whose rulers were known for their support of all schools of Tibetan Buddhism. Nurtured by this spirit, Khyentse Wangpo had a profound appreciation for all traditions and the purest devotion for their lineage holders, regardless of their institutional affiliation or their rank in society. Acutely aware of the potential, irreversible loss of countless precious teachings, Khyentse Wangpo chose the life of a wandering monk over that of the leader of a monastic institution. For a total of about thirteen years, he traveled extensively to receive all the instructions he could from the major and minor lineages. His closest collaborators on this mission were Jamgön Kongtrul, Mipham Gyatso (1846–1912), and Loter Wangpo (1847–1914).[4] Their combined work resulted in a period of unparalleled literary productivity. Hundreds of volumes containing teachings from all lineages of Tibetan Buddhism were produced under the leadership of the great Khyentse.

One of the auspicious fruits of Khyentse Wangpo’s efforts is the Compendium of Sādhanas. He started this work around the age of twenty during his first stay in Central Tibet. The basis was a collection called the Golden Volume, which contained instructions for many tantric teachings from the Sakya and Kadampa traditions.[5] To these, he added other authentic teachings he had received from various traditions, expanding the Compendium to ten volumes. Whenever a cycle of teachings was missing important elements—a lineage prayer, a short sādhana, instructions for the authorization ritual, and so on—Khyentse Wangpo would write the missing texts to complete the cycle. Dilgo Khyentse said, “At the heart of these great Dharma treasuries lie almost all Jamyang Khyentse Wangpo’s extraordinary secret writings—particularly in the Compendium of Sādhanas.”[6] Indeed, the Compendium contains about 240 original compositions of Khyentse Wangpo, most of which are also found in his Collected Works (Kabum). To ensure the continuity of all these lineages, he gave the transmission for these teachings on four occasions over the course of his life.[7]

“At the heart of these great Dharma treasuries lie almost all Jamyang Khyentse Wangpo’s extraordinary secret writings—particularly in the Compendium of Sādhanas.”

Besides the individual cycles, Khyentse Wangpo included in the Compendium entire collections, such as the Hundred Teachings of Bari Lotsāwa (1040–1111) and the Hundred Teachings of Narthang; the teachings and authorization rituals for the eighty-four mahāsiddhas according to two lineages; some Nyingma teachings from both Kama and Terma traditions; as well as ancillary material, such as general explanations on tantra, special instructions on the subtle body, and so forth. Dilgo Khyentse stated, “Eventually, the exhaustive compilation of this great Dharma treasury was completed, brimful with many, many wonderful qualities, like that of describing the correct and absolutely reliable method for perfecting the two accomplishments, free from the extremes of being too elaborate or too abbreviated.”[8]

Before his passing, Khyentse Wangpo instructed his students to expand and complete the Compendium. Thus, Jamgön Kongtrul and Loter Wangpo collaborated to produce an additional five volumes, including many works from Khyentse Wangpo himself. With the task completed, the entire collection was ready for publication. A fourteen-volume manuscript was produced, which became the basis for the 1902 xylograph edition from Derge. This edition was reproduced by photomechanical process and published in 1970 by Dzongsar Institute in Kangra, India. Two digitized editions have been published since, one in 2002 by Guru Lama from Sachen International in Kathmandu and the other in 2015 in Chengdu.

Today, the Compendium of Sādhanas is widely used. Most authorization rituals and practice liturgies given by Sakya lamas—except for the Lamdre and Vajrayoginī cycles—are taken from this collection. With each cycle of teaching comprising all the elements needed for transmission and practice, it represents an invaluable resource for both lamas and practitioners of all traditions.

Overview, historical context, and introduction to the Compendium written by Christian Bernert

Editions of the Compendium of Sādhanas

[2] Sādhana (Tib. sgrub pa’i thabs) literally translates as, “means of accomplishment.” The term often refers, in a more narrow sense, to practice liturgies centered around tantric deities. It can also be understood in a wider sense as a whole path or system of practice followed to achieve awakening, involving recitation, rituals, and other practices.

[4] Jamgön Kongtrul from Palpung Monastery of the Karma Kagyu tradition was tasked by Khyentse Wangpo with the composition and collection of the Five Great Treasuries (mdzod chen lnga): Treasury of All Knowledge (shes bya kun khyab mzdzod), Treasury of Kagyu Mantras (bka’ brgyud bsngags mzdod), Treasury of Jewel Mines (rin chen gter mdzod), Treasury of Oral Instructions (gdams ngag mdzod), and the Extraordinary Treasury (thun mong ma yin pa’i mdzod); the Nyingma lama Mipham Gyatso with the writing of exegetical treatises according to the Nyingma tradition; and Loter Wangpo from the Sakya Ngor Monastery with the compilation of the Compendium of Tantras (rgyud sde kun btus).

[5] Tib.: Gser pod. This particular volume does not seem extant, possibly because it was considered superseded by the Compendium.

*Extracted from Autobiography of Jamgön Kongtrul, 532–43

We use cookies on our website to give you the most relevant experience by remembering your preferences and repeat visits. By clicking “Accept”, you consent to the use of ALL the cookies.
ACCEPT
Manage consent

This website uses cookies to improve your experience while you navigate through the website. Out of these, the cookies that are categorized as necessary are stored on your browser as they are essential for the working of basic functionalities of the website. We also use third-party cookies that help us analyze and understand how you use this website. These cookies will be stored in your browser only with your consent. You also have the option to opt-out of these cookies. But opting out of some of these cookies may affect your browsing experience.
Necessary Always Enabled
Necessary cookies are absolutely essential for the website to function properly. These cookies ensure basic functionalities and security features of the website, anonymously.
Functional
Functional cookies help to perform certain functionalities like sharing the content of the website on social media platforms, collect feedbacks, and other third-party features.
Performance
Performance cookies are used to understand and analyze the key performance indexes of the website which helps in delivering a better user experience for the visitors.
Analytics
Analytical cookies are used to understand how visitors interact with the website. These cookies help provide information on metrics the number of visitors, bounce rate, traffic source, etc.
Advertisement
Advertisement cookies are used to provide visitors with relevant ads and marketing campaigns. These cookies track visitors across websites and collect information to provide customized ads.
Others
Other uncategorized cookies are those that are being analyzed and have not been classified into a category as yet.
SAVE & ACCEPT