Khyentse Vision Project is a non-profit initiative under the umbrella of Khyentse Foundation.

Our mission is to translate the collected works of Jamyang Khyentse Wangpo, and to make this treasury widely accessible to modern readers. The content of the collections sheds light on a vast range of topics relevant to both practitioners of Tibetan Buddhism and scholars of Tibetan history and culture.

More than 28,000 pages of Jamyang Khyentse Wangpo’s works remain to be translated, including both the original 13-volume Collected Works (Kabum) collection and the 24-volume Seven Transmissions (Kabab dun) collection of treasure teachings, instructions, and liturgies. Altogether, the translation of these collections is projected to take 10 to 15 years to complete. The project is currently producing English translations and will eventually expand to include other languages.

Our aspiration is to widen the scope of the project in the future to become a hub for the translation of all the masters of the Khyentse lineage in collaboration with related organizations, such as Tsadra Foundation and Lotsawa House.

Khyentse Vision Project has built a strong core team of professional translators, editors and technical experts, all working together to establish the essential project foundations for this ambitious undertaking. We will be publishing our first published translations soon, and our reading room, which is currently under development, will be launched in early 2023. 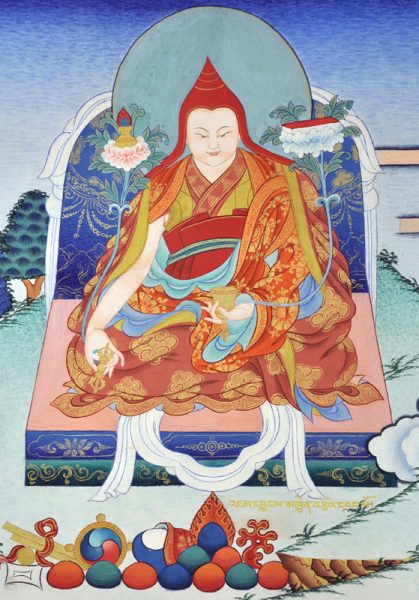 “Jamyang Khyentse Wangpo Kunga Tenpe Gyaltsen, otherwise known as Pema Õsel Do Ngak Lingpa, is the supreme example of someone who truly lived the Buddha’s teachings.”

Khyentse Wangpo was born in 1820 to a noble family in Derge, Kham. At the age of twelve, he was identified as an emanation of the Sakya Khenpo Tartse Jampa Namkha Chimé, but he chose not to be tied to any one tradition. He received monastic ordination at the Nyingma establishment of Mindroling and was later also recognized as an emanation of the great Nyingma master Jigme Lingpa. He spent a total of thirteen years wandering throughout Tibet, receiving and collecting teachings and transmissions of every kind. All in all, he recorded having received teachings or transmissions from more than one hundred masters during his lifetime.

Eventually returning to settle in a small dwelling at Dzongsar Tashi Lhatse Monastery, he committed most of the second half of his life to solitude. However, this seclusion did not prevent him from carrying out an ever-wider circle of activity. He is perhaps most celebrated for his collaborations with other great lamas and for the vast number of outstanding masters who were his students.

During the 1850s, Khyentse Wangpo collaborated so closely with Jamgön Kongtrul Lodrö Taye and Chokgyur Dechen Lingpa that the three became known as the “Great Triumvirate.” Khyentse Wangpo revealed innumerable treasures in tandem with Chokgyur Lingpa, and in partnership with Jamgön Kongtrul he was responsible for envisioning and designing the collections that became known as the Five Treasuries (Dzö Nga)—most notably the Treasury of Precious Termas (Rinchen Terdzö) and the Treasury of Precious Instructions (Damngak Dzö). He was responsible for encouraging Jamyang Loter Wangpo to compile the collection of Sakya empowerment manuals that became known as the Complete Collection of Tantras (Gyude Kuntu), and he himself organized a collection of Sakya liturgies known as the Compendium of Sādhanas (Drubtab Kuntu). He also produced eight volumes of songs and instructions from the Eight Practice Lineages (Drubgyu Shingta Gyekyi Sheldam Sung Gur).

Khyentse Wangpo became an authority on all the different teachings from the different schools of Buddhism in Tibet, as well as the Bön teachings. Shunning sectarian bias, he encouraged his students to appreciate the profundity of all the existing traditions. This approach became known as the rimé, or nonsectarian, approach. He was regarded as the last of the five tertön kings who were prophesied by Guru Padmasambhava in the ninth century, and he gained the epithet “Holder of the Seven Transmissions,” referring to the fact that he was the only master to hold the seven transmissions of treasure teachings: those of the spoken teachings (kama), earth treasures (sater), mind treasures (gongter), reconcealed treasures (yangter), pure visions (dagnang), recollections (jedren), and the hearing lineage (nyengyu).

When he passed away in 1892, Khyentse Wangpo left behind an immense legacy. When Tibetans were forced to flee their homeland in the mid-twentieth century, the numerous collections he either compiled or inspired others to produce were easily transportable, which made it possible for many rare and precious teachings to be saved. His direct bequest to us is the preservation and transmission of countless Dharma teachings, and the revival of lineages that might not otherwise have survived.

It is in the spirit of this broad vision, Khyentse Vision Project is dedicated to preserving and transmitting Jamyang Khyentse Wangpo’s legacy for future generations who may not have access to the Tibetan language. At a time when Buddhism is spreading throughout the world, there is a great urgency to make the precious wisdom contained in his writings available to all. 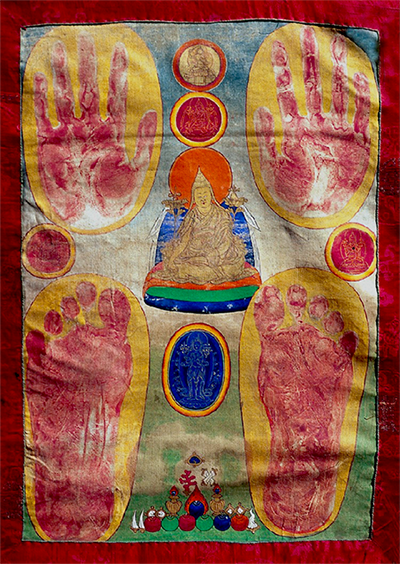 At the center is Jamyang Khyentse Wangpo, accompanied by his actual hand and foot prints. His right hand is extended across his knee, palm up, holding the stem of a lotus blossom, upon which is a sword and a book—emblems of wisdom and Sūtra erudition. His left hand is in his lap, cradling a vase, while holding the stem of a lotus blossom that rises above his left shoulder.  Resting upon the lotus is a vajra and bell—emblems of Tantra. Attired in the garb of a fully ordained monk, he wears the hat of a paṇḍita with three rings, representing the accomplishment of mastering all three components of the Buddhist Tripiṭaka.

We use cookies on our website to give you the most relevant experience by remembering your preferences and repeat visits. By clicking “Accept”, you consent to the use of ALL the cookies.
ACCEPT
Manage consent

This website uses cookies to improve your experience while you navigate through the website. Out of these, the cookies that are categorized as necessary are stored on your browser as they are essential for the working of basic functionalities of the website. We also use third-party cookies that help us analyze and understand how you use this website. These cookies will be stored in your browser only with your consent. You also have the option to opt-out of these cookies. But opting out of some of these cookies may affect your browsing experience.
Necessary Always Enabled
Necessary cookies are absolutely essential for the website to function properly. These cookies ensure basic functionalities and security features of the website, anonymously.
Functional
Functional cookies help to perform certain functionalities like sharing the content of the website on social media platforms, collect feedbacks, and other third-party features.
Performance
Performance cookies are used to understand and analyze the key performance indexes of the website which helps in delivering a better user experience for the visitors.
Analytics
Analytical cookies are used to understand how visitors interact with the website. These cookies help provide information on metrics the number of visitors, bounce rate, traffic source, etc.
Advertisement
Advertisement cookies are used to provide visitors with relevant ads and marketing campaigns. These cookies track visitors across websites and collect information to provide customized ads.
Others
Other uncategorized cookies are those that are being analyzed and have not been classified into a category as yet.
SAVE & ACCEPT